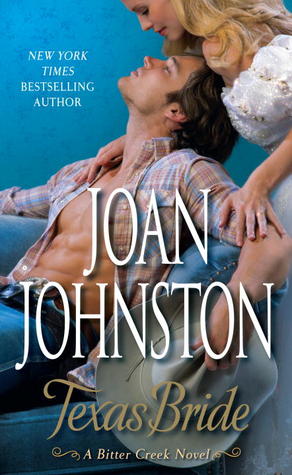 To save her siblings from a cruel orphanage, Miranda agrees to blindly marry a Texan cowboy.

I was looking for a sweet, easy to read book after reading The Stepford Wives and I noticed this one was available at the library and was one mentioned in Genreflecting.

N/A — there is nothing exactly unique or notably outstanding about this book, but that doesn’t mean it isn’t a good book.

Miranda and her five siblings have been living in an orphanage with a brutal caretaker ever since her parents died in The Great Chicago Fire. Miranda is finally eighteen and will be forced to leave in the morning, leaving her siblings behind while her future will hold washing dishes and struggling to survive. Her sister Josie comes up with a plan for Miranda to be a mail-order bride fulfilling the ad a Texan cowboy posted in the paper and then send for the rest of them when she is able. Miranda agrees seeing no better option and whisks her two youngest siblings away with her (Nick, 10, and Harry, 4) to keep them safe and prove her siblings can be useful.

Jake Creed is down on his luck. His step-father stole his father’s property away from him and has been trying to run him out of town since he took over his uncle’s land, and his wife and son died in childbirth just six months prior. Jake has been trying to run a cattle ranch and care for his two year old daughter and disabled father-in-law on his own. He needs a wife to tend his house and raise his daughter, but he doesn’t need to love her.

Both bring lies into their marriage and secrets abound, but can a marriage of convenience also spring love?

I had fun reading this book. If you don’t think too deeply about it, it is pleasant and interesting, even with all the horrible things that happen within. Sometimes a ‘Happy Ever After’ is what is needed. I may not be the biggest fan of this couple, but they aren’t the worst I have ever read about.

The characters did not all feel flushed out as much as they could be and seemed a bit one dimensional. Miranda definitely had the most personality and sides to her and seeing her grow after being abused in the orphanage. Even Nick grew as a character, which was fun to read. Jake, Slim, and the younger children were pretty boring. The children are there for cute factor and obstacles while Slim is just the baby sitter. Jake moans and groans about how he can’t have sex with his bride because he doesn’t want to make her pregnant. I suppose there is a slow build of romance here, but it is more like he finally gave into his lust.

Plot-wise, I thought the book moved quite smoothly. A woman dying in childbirth was a real concern back in those days and Miranda wanting family of her own made sense. What I thought were the bigger plot points, Miranda’s sisters back home and Blackthorne keeping Jake from ranching fully, were brought up often, but never actually resolved. Those are two big issues, yet they almost seemed like non-issues in the end. While the sister issue is resolved in the sequels (they are the stars of the next books), the Blackthorne one won’t be. So, the seemed a bit anti-climatic.

This book is definitely for romance readers, although the accuracy over the historical setting can be debated.

I would create a bleak picture of Miranda and her siblings’ lives in the orphanage, trying to create empathy in the audience and then give hope in the form of this mail order bride position.

Then I would paint a picture of Jake, starting with a quote about how he refuses to consummate his marriage, then moving into his difficult life and need for a wife.

Another way I might start this is reading a revised version of the siblings in the kitchen as they decide for Miranda to go live in Texas, to really get the crowd into the book.

Published by Sionna (Books in Her Eyes)

View all posts by Sionna (Books in Her Eyes)