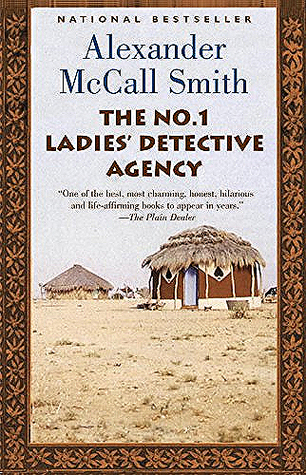 Precious Ramotswe opens up her own business to become the first lady detective in Botswana, and cases roll in quickly.

We had to read this book for class, but it is also one I have seen mentioned in Goodread’s groups, so I wanted to give it a try.

This is a book set in a foreign country, Botswana, and that makes it quite unique here in the states, especially since most books available here are set in America, Britain, or an alternate universe.

Synopsis:
Precious Ramotswe’s father dies leaving her with his healthy cattle, but beforehand tells her to sell it all and set herself up in a business. She takes his words to heart and does just that, although perhaps not creating the business he would expect. No, Ramotswe has decided to come a detective, the first lady detective in her country. She knows drumming up business and keeping it running will be a hard job, but she is ready for it.

Just shortly after opening the business, Mma. Ramotswe receives her first customer, goes on the radio, and even has a spot in the newspaper. She may still be in the red, not making enough to cover the bills, but people are coming in and she is solving problems. Most are common ones she can deal with simply enough, mostly catching cheating husbands or the like, but some turn out to be sad for her, such as a missing son that no one is looking for.

This book was incredibly boring for me. Had I not had to read this for class, I wouldn’t have finished it. As it was, I skipped paragraphs and sometimes even pages in order to get through it. The biggest problem is that I like action and an over-arching story and even adventure or something, while this is more of a character-driven story.

Now, one of my biggest problems is when the time within the book drastically changes, with almost no warning, or no reason. This mechanism to tell the reader about a character’s past or about the consequences of actions, is rather annoying, especially when one is trying to keep track of a story. A book in a series told over time, should be linear, in my opinion. Jumping ahead one year into the future tells me we are now a year into the future, but immediately jumping back to ‘the present’ was annoying. There are also whole chapters on the scenery or other side characters who may give background on Mma. Ramotswe’s character.
So, 20% into the book I was ready to put it down, but I do see why people may enjoy this story.

For starters, for people who enjoy light, quick stories this is perfect. For the most part, Mma. Ramotswe takes a case and wraps in up within a chapter, so this can be read in those little moments of free time. The focus is also very much on the characters, so if people enjoy that sort of thing, then they will feel a deeper connection with the book. It is a charming little book that is not meant to hook people, but let them slowly sink in to.

Other Reviews from Novelist:

Publishers Weekly:The  African-born author of more than 50 books, from children’s stories (The  Perfect Hamburger) to scholarly works (Forensic Aspects of Sleep), turns his talents to detection in this artful, pleasing novel about Mma (aka Precious) Ramotswe, Botswana’s one  and only lady  private detective. A series of vignettes linked to the  establishment and growth of Mma Ramotswe’s “No . 1 Ladies  Detective Agency” serve not only to entertain but to explore conditions in Botswana in a way that is both penetrating and light thanks to Smith’s deft touch. Mma Ramotswe’s cases come slowly and hesitantly at first: women who suspect their husbands are cheating on them; a father worried that his daughter is sneaking off to see a boy; a missing child who may have been killed by witchdoctors to make medicine; a doctor who sometimes seems highly competent and sometimes seems to know almost nothing about medicine. The  desultory pace is fine, since she has only a detective manual, the  frequently cited example of Agatha Christie and her instincts to guide her. Mma Ramotswe’s love of Africa, her wisdom and humor, shine through these pages as she shines her own light on the  problems that vex her clients. Images of this large woman driving her tiny white van or sharing a cup of bush tea with a friend or client while working a case linger pleasantly. General audiences will welcome this little gem of a book just as much if not more than mystery readers. (Aug. 27) — Staff (Reviewed July 29, 2002) (Publishers Weekly, vol 249, issue 30, p57)

Kirkus:Botswana’s only female detective, Precious Ramotswe—-whose investigation of whether the  father who’s inconveniently turned up on the  doorstep of Happy Bapetsi, who’s been getting along fine without him, is really her father, edges her toward considerably darker waters-—isn’t just ready to confront everything from theft to kidnapping to murder: she’s ready for prime time. The  first American publication of this 1999 debut has been preceded by two special Booker citations and two sequels, Tears of the  Giraffe (2000) and Morality for Beautiful Girls (2001), both forthcoming in the  series. (Kirkus Reviews, June 1 , 2001)

Perfect for someone looking for a quick, light read, or wanting a setting outside of the US.

No doubt about it, this booktalk would need to focus on the characters, mainly Mma. Ramotswe. Perhaps I would talk some of her father and her father’s cousin’s experience with her and how smart she is as a child. This would give her a background and help people warm up to her.

Then, I might read a revised scene of her first ‘case’ when she found the fraud in her cousin’s husband’s accounts. This would show how she came to want to be a detective and how she has the knack for it.

I may start summing it up with the types of cases she receives, ending with the missing son and how it tugs at her heart, making her question why she is in this business when she cannot help everyone, “…or can she?”